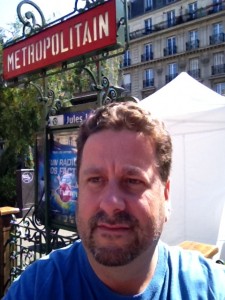 Me, in Paris, during my 2011 backpacking tour across Europe.

PARIS – The traditional age to trek across Europe with a backpack, a Eurail pass and no definitive itinerary is the early 20s, in that gap between the end of college and the beginning of real life.

Having missed out on such youthful adventures, I decided to scratch the itch as a 42-year-old divorced guy with a 19-day journey through France, Germany, Belgium and the Netherlands. Sure, it would have been easy to join a tour bus group or go the antisocial route by staying alone in hotels, but I’d always been curious about the hostel experience and wondered if I could pull it off a couple decades past my backpacking prime.

The blogs, books and articles I read in preparation for my spring trip suggested that I pack light – half of the clothes I’d think I need – but make sure I have such essentials as a sturdy backpack, travel sheets, a quick-dry microfiber travel towel and a money belt. The towel turned out to be a great investment, although the hostels I stayed at were nice enough to give me confidence to use their provided sheets.

My journey began in Paris, checking into a 10-bed coed dorm room at clean, modern hostel in the off-the-beaten-path Crimée neighborhood.

St. Christopher’s Inn has a hip social vibe. Its check-in desk leads into the spacious Belushi’s Bar, where post-sightseeing travelers gather in the evenings to grab a bite, catch up on Facebook and kick back a few Kronenbourgs.

Any concerns about traveling alone quickly subsided in this setting, which is the beauty of the hostel experience. Vacationers in small groups often stay within their cliques, but those traveling alone are drawn to each other. And the age gap between me and nearly every traveler I met didn’t seem to matter.

Nearly everyone seems to be on the journey of a lifetime, so icebreakers are often chats about where you’ve been and where you’re headed next.

I wound up taking a day off from visiting Paris’ touristy areas to spend a relaxing afternoon exploring Crimée with a girl from California and a guy from Canada. I had wanted to spend another night or two at St. Christopher’s but the place was booked, so I relocated to the Le Montclair hostel in Paris’ artsy Montmartre neighborhood. There I met more new friends from as far away as Brazil and settled into a nice mix of solo daytime sightseeing and nighttime socializing.

Nearly everyone that I met on my trip was so open (I guess you have to be, to room with strangers), and I found that conversations go on for hours, are personal and sincere and cover so many topics. The odd thing about the experience is the people you’re getting to know so well are almost always from countries other than the one you’re in.

After four days in Paris, it was time to begin working in my trip’s secondary purpose – visiting some of Europe’s smaller towns from which my ancestors once hailed.

It’s great walking the streets of Paris, Amsterdam and Berlin, but how many people get to stroll through the villages of Urcerey, France, and Stadtlauringen, Germany? I also vowed to visit relatives from Laatzen, Germany and the Netherland’s Alphen aan den Rijn.

Such obscure destinations were going to require some train rides, so it was time to head to Paris’ Gare de L’est train station and activate my Eurail pass. The Select Pass I bought allowed 11 travel days within a two-month period within the borders of France, Germany, Belgium, Luxembourg and the Netherlands. Eurail treats travel to Belgium, Luxembourg and the Netherlands as one country, so I was able to get a three-country pass rather than the more expensive five-country pass.

Youths up to age 25 can get the same pass for $480 for second-class seating, but adults 26 and older must buy the more expensive first-class Eurail pass, currently priced at $736. It was a hefty budget item, but one that I willingly swallowed, since other than airfare and in-city metro and streetcar tickets, it would be my only other transportation expense.

It turns out the pass saved me a little less than $200 off the cost of individual first-class tickets, but the pass earned its value with flexibility as I was often picking my next destination on the fly.

Train reservations are hardly ever needed, with a few exceptions. In Belgium I learned that reservations are often required for high-speed train trips between big-city destinations. The add-on reservation for my Brussels to Paris trip cost me an additional 42 euros (about $55), but it included a full meal and glass of wine much like airplane first class.

I learned another valuable rail pass lesson on a leg from Belfort, France, to Wurzburg, Germany: Check your route.

The Belfort-Wurzburg trip made connections in Mulhouse, Bale and Frankfurt, and I didn’t realize where Bale was until I got off the train there and was greeted by a “Welcome to Switzerland” sign. Switzerland wasn’t one of my Eurail pass countries, but the SNCF train conductor missed checking my ticket on the Mulhouse-Bale leg so I was able to pay the Swiss Franc equivalent of a mere $1.50 for a partial ticket to cover the foul-up, a small price to pay to visit an extra country. Why yes, I have been to Switzerland.

The Eurail pass, which offers unlimited travel for each day in which it’s punched, allowed me to visit the European towns that appear throughout my genealogical tree and other cities that piqued by interest. And each new hostel provided a new adventure.

The German city of Würzburg is vibrant, with an outdoor marketplace filled with pedestrians selecting fresh fruit and vegetables or sitting outside in one of the numerous beer gardens and cafes. The Babelfish hostel offered a nice selection of local craft beers, prompting myself and a roommate from Australia to belly up to the front desk for hours and chat with the super friendly clerk, prompting her to stay well past her shift’s end.

After embarking on a custom-designed Berlin walking tour sketched out by The Circus hostel’s desk clerk, I returned after dinner to share a few patio beers with some fellow hostelers from Chicago. Staff at 10 p.m. abruptly folded up our tables and directed us down to Goldman’s Bar, a cool little basement hideaway that draws locals as well as travelers.

Details are sketchy in my memory, but the night featured great live music by Swiss indie rock group All Ship Shape, a near bar brawl over a spilled beer between a fedora-wearing guy from Poland and a group of Canadians, numerous shots of Goldschlager liqueur raised to a candle-lit shrine to actor David Hasselhoff and a splitting next-morning headache.

Then there was the night at St. Christopher’s at the Winston in the heart of Amsterdam’s red light district, where I relaxed with a pair of couples from Manchester, England. We shared stories over a few beers on the back deck while watching tourists “window shop” as the smoky scents from hostelers’ “coffee shop” purchases filled the outside air.

After Amsterdam, I found tranquility at the Jorplace hostel in Scheveningen near The Hague, a laid-back surfer’s retreat with an outdoor deck adorned with a colorfully painted Volkswagen van, hammocks and acoustic guitars. It was off-season, so I enjoyed a good night sleep as my six-bed dorm room’s sole resident before waking up early and strolling the beautiful North Sea beach.

Another highlight in the Netherlands was meeting up with friends from Rotterdam and jumping on their houseboat for a picturesque excursion through the woodsy Nationaal Park De Biesbosch. With no set destination, we wound up docking in Breda and unknowingly landed in the middle of the Breda Jazz Festival.

My plans had me on Day 19 flying out of Paris, so I decided that it would be fitting to end my European adventure where it began, at St. Christopher’s Inn hostel.

After heading out for an evening to get one last look at the City of Lights, I returned to Belushi’s Bar around 11 p.m. and planned to prepare for a day of travel before turning in early.

But my mostly empty table quickly filled with new friends from Albany to Australia who were in the early stages of their journeys and ready to party.

With the bar’s $4 Midnight Jager Train about to kick in, I bought a round of Jagermeister shots for our group and we raised our glasses to ending and embarking on excursions. I put down my empty shot glass, said goodbye and headed up to bed.