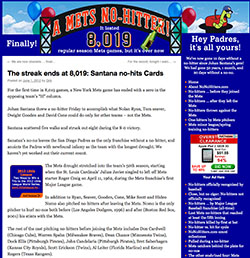 I’ve been developing websites since the late 1990s, and in 2008 I decided to combine those Internet skills with my lifelong love of the New York Mets to create NoNoHitters.com.

The blog, devoted to chronicling the New York Mets’ streak of failing to throw a single no-hitter in nearly a half-century of existence, was an instant hit with Mets fans. It also garnered more than its share of media attention, drawing feature stories in the New York Times, the Wall Street Journal, the New York Post, ESPN and the Mets’ own television magazine, “Mets Weekly.”

The site’s fame reached a frenzied pace in June 2012 when Johan Santana threw the Mets’ first no-hitter to end the streak, and NoNoHitters.com has since evolved into baseball’s online home for all no-hitters. (The archived Mets version remains online at mets.nonohitters.com).

Here’s a sampling of the media coverage that NoNoHitters.com has drawn over the years: